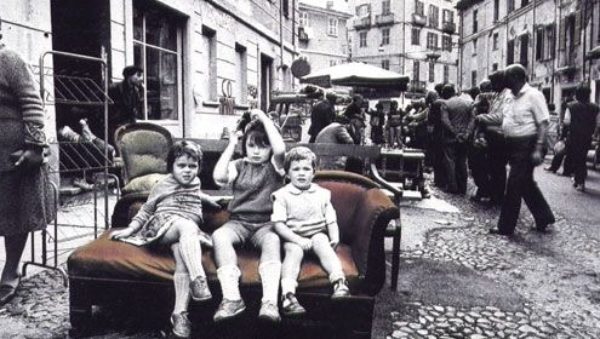 The sun is shining at the Gran Balon.
The old man tries to repair himself with his hand, he is asking the merchant about the condition of the rubbers of the fountain pen spotted among the many, indicated with childish conviction. Then he takes a step and places himself in the shadow cone, takes out his monocle and approaches the tiny fountain pen. He is an expert, his are almost sacred gestures, the meticulous examination of the ancient, archaic object, which current fingers could, with the purchase, regenerate.
Along the village the radios on Sunday matches are at full volume as was the custom in the years in which the current antiques lived their first glory. Dialogues on how well the sun feels good, how vice versa the cold stings here where the sun does not shine, here where the junk dealer stands still and sees those who defy time and look for something they have lost.
Jane Austen’s Pride and Prejudice is translated Pride and Prevention; two bedside tables, painted in light blue and green, cost 220 euros; 50 cents for the postcard that Aunt Giovanna sent from Terni, stamped January 2, 1966, to the grandchildren of Rivoli bringing them obsequious greetings in elegant handwriting.
No shelter from the sun, on the other hand, on the open space between via Mameli and via Borgo Dora, where the wedding dresses find space, kissed by the rays. Some have yellowed, most have remained white. Two women, mother and daughter, review them, touch, appreciate and disdain, comment. Once again the young woman’s eyes light up: she feels it: she falls in love with her.
At the Gran Balon, the second chance market, where time is circular and space is marked by the moving borders of the shadow line, when the girl pays for the white dress the sun begins to go down.